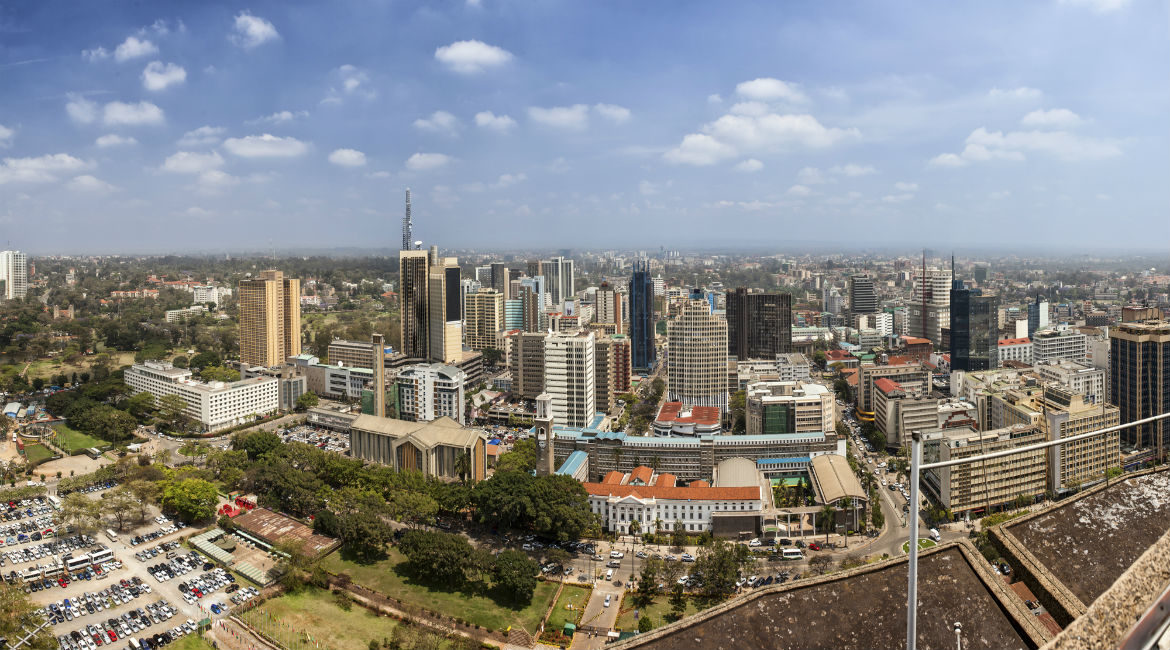 By Alastair Tyler, International Director at the London Institute of Banking & Finance

The vital economic role that banks fill is part of the reason why the lack of financial inclusion in the developing world is a Catch 22. People who cannot afford bank services find it hard to borrow and save. That means their local economies are starved of investment and growth, which makes it difficult to… borrow and save. What to do?

The majority of people in developing countries have no access to formal banking services because bank fees are relatively high. That will not change in the short-term. Building bank branches and staffing a bank is costly, as is providing the equity capital that supports lending. Now, you might say that it need not matter if the majority of people do not have bank accounts—as was the case in the United Kingdom until the 1970s. As long as businesses can borrow to grow, capital will flow through the economy much like water flowing out from a reservoir. It will get down the pipes to where it is needed.

What that overlooks is that banks run the pipes. Because they underpin liquidity, they are the water boards of an economy. If there is no affordable payments infrastructure in place, as is the case in many underdeveloped countries, there will be only widely dispersed pools of capital—most of which will not flow to where they can be used best. What is more—individual workers and consumers will have to waste a lot of time and energy trekking around to deliver cash, or will have to trust informal networks that may fail. Neither helps boost growth.

Back in 2002, researchers in Africa noticed that people in Botswana, Ghana and Uganda had developed an ingenious way to make payments without going to banks: they were using mobile airtime as a form of currency. Inspired by that, M-PESA, a mobile payment system, was set up by Safaricom (part of Vodafone) in Kenya in 2007. The M-PESA story is now a very familiar one. It has been a roaring success—more than 90 percent of the adult population had a M-PESA account in 2016, according to the GSMA, the global mobile operators association. M-PESA has boosted Kenyan growth, and it has inspired other systems. In 2016, there were 277 million mobile-money accounts in sub-Saharan Africa, more than the total number of bank accounts, the GSMA stated. The service has also moved beyond enabling person-to-person payments. Now, users can access small loans and set money aside, have their salaries paid and deal with bills. There are also mobile-backed insurance products. Just as importantly, developing market governments are using digital cash to boost revenue collection and efficiency. In its ‘Mobile Money – State of the Industry 2017’ report, the GSMA noted that Kenya’s National Transportation Safety Authority nearly doubled the revenue it collected between July 2015 and October 2016, from an average of US1.1 million per month to US$2 million a month.

M-PESA changed the Kenyan economy. The World Economic Forum has claimed that between 2006 and 2013, the real per-capita income in Kenya grew 14 percent, and it estimated that total factor productivity (which aims to include all inputs, including technology) was boosted by M-PESA by 0.5 percent on an annualised basis.

Why did M-PESA take off? Was it because it offered an easy way to save small amounts, or reduced payment friction? In part. One of the main reasons for the success of M-PESA, academic surveys argue—see, for example, Jack W, Suri T (2014), “Risk sharing and transactions costs: Evidence from Kenya’s mobile money revolution”, The American Economic Review (104/1), 183-223—is that it made it much easier and cheaper to receive remittances. That, in turn, enabled people to better mitigate economic shocks and risks.

What about other parts of the developing world? Could similar economic gains be made? Could telcos take over the network function of banks to increase financial inclusion in countries in which banking is already more accessible? If they could, what will that mean for traditional banking?

The region that has seen the strongest growth in mobile payments over the past few years is Latin America and the Caribbean. As of the end of December 2016, there were 23 million registered mobile-money accounts in the region, up from less than 1 million in December 2011. One of the stumbling blocks for the uptake of mobile money, just as with bank accounts, is the cost of access. The unit cost of airtime has fallen as technology has improved. However, the GSMA notes that income inequality in Latin America and the Caribbean is high. On average, the poorest 40 percent of the population in the region would have to spend 17 percent of their income to own a mobile—though governments and operators are trying to help.

What is striking about Latin America and the Caribbean is that they have—at least in comparison with sub-Saharan Africa—developed bank sectors. In the large cities, there are plenty of ATMs (automated teller machines), bank branches and the financial products and services one expects from a developed economy. Why, then, the growth of mobile money? Just as in sub-Saharan Africa, the likely answer is remittances.

According to the World Bank, global remittances fell in 2016, down 1.4 percent on 2015. (Global remittances also fell in 2015; the first time in 30 years that there was a two-year slide.) However, one region bucked the trend: Latin America and the Caribbean, where remittances grew 7.4 percent year-on-year to US$74.3 billion. Many poor people in Latin American rely on money sent from relatives working abroad—often in the United States. In 2016, for example, remittances represented 17.1 percent of the gross domestic product (GDP) of El Salvador, according to the World Bank.

The well-developed bank sector in Latin America and the Caribbean may also be a supporting factor in the growth of mobile money. A report from the World Bank—Mas I, Radcliffe D (2010), “Mobile Payments go Viral: M‐PESA in Kenya”, Bill & Melinda Gates Foundation—points out that there is a “sweet spot” for mobile money in terms of bank-branch coverage. Too many branches, and bank services may be preferred. Too few, and mobile-money agents will not have access to enough liquidity.

Who’s on the line?

Global remittances have fallen, at least in part, because of the cost and reputational risk of complying with anti-money-laundering (AML) regulations. Banks are required to know not only their customer but also their customer’s customer. Many have severed correspondent-banking relationships with money-transfer operators (MTOs) that traditionally organised remittances. However, as the boost that Kenya got from M-PESA suggests, such a squeeze on remittances can have negative consequences in the developing world.

Developing-world countries faced with cuts in remittances have started to examine how they might support them better without tripping over global financial regulations. Parts of Latin America have clunky payments systems, lack interoperability on payments and face regulatory barriers to making remittances work more smoothly. However, mobile technology can help. Ecuador and Peru are setting up national payments platforms that support digital payments and financial inclusion. In Peru, 34 financial institutions have backed the “Bim platform” (which stands for Billetera Móvil, or mobile wallet). It is viewed as one of the first national mobile-payments systems set up to focus on financial inclusion.

One of the reasons why mobile technology can increase financial inclusion and help solve AML and KYC (know your customer) problems is that operators know a great deal about their customers and who their customers know. When M-PESA was launched, it used simple text messages to inform agents about what payments to make. Now smartphones can be used to predict credit-worthiness, track social networks and, some companies claim, develop full psychological profiles of users. More prosaically, smartphones offer full online access and sophisticated money-management apps. Not all users in the developing world will have smartphones, but, increasingly, many do.

Mobile money payments are not a panacea for the compliance challenges that banks face, but, especially where governments are open to dialogue on regulation, they can leverage technology to try to tackle AML and KYC challenges. Just as importantly for the recipient countries, mobile payments are much cheaper. The GSMA’s 2017 report says that in August 2017 the cost of sending US$200 via mobile money was, on average, 1.7%, or below half the average cost of using an MTO.

A world beyond payments

Remittances bring an infusion of much-needed capital to developing economies, and they enable individuals to better withstand shocks. The same, of course, applies at the macro level. A country that trades a diversity of goods and services is less exposed to any one risk. What happens, though, when a country that wants to trade more does not have much access to the international financial system?

Although US President Barack Obama announced in 2016 that some of the trade restrictions on Cuba would be removed, that has yet to happen, and the long-standing (and much-criticised) economic embargo of Cuba by the US is still in place. The economy is not blooming. The Economic Commission for Latin America and the Caribbean noted that in 2016 the exports of goods and services from Cuba fell by around 16 percent and that its overall GDP declined by around 0.9 percent. Seventy percent of its exports by value are in services—mainly medical—and its primary goods exports are nickel, oil derivatives and, then, sugar.

The main growth industry in Cuba is tourism. This, however, means opening up to the world; trading foreign currency; bringing in investors; importing products that tourists would want to see; and developing the island’s infrastructure. Assuming that, at some point, the US will allow the country fully back into the international fold, Cuba will need to be able to organise and finance major investment in its tourist industry. That, in turn, will mean dealing with the international financial system—a system that has grown immeasurably in technological and regulatory complexity since the revolution of 1958.

If recent developments are anything to go by, Cuba is planning to get back into international financial waters. It recently brought in outside experts, in particular the London Institute of Banking & Finance, to help train its financial community to tackle risk, regulation and compliance and other complex issues that surround banking today. The work with the Institute is being undertaken together with the Central Bank of Cuba and the British Embassy in Havana, and the United Kingdom’s government is footing the bill. After Philip Hammond visited the island in 2016 (he was then UK foreign secretary and the first foreign secretary to visit Cuba since 1958), the UK started work on boosting trade links with Cuba.

Cuba is still very much a cash-based economy, but that also means that it offers a clean slate for technology to transform its payments system. There are likely to be many benefits from doing so. Not only could Cuba gain from mobile remittances in the way that other developing economies have, and attract tourists who are used to paying with phones and cards, it could start to overcome some of the KYC and AML barriers to trade that it would face were it to try to enter the global economy now.