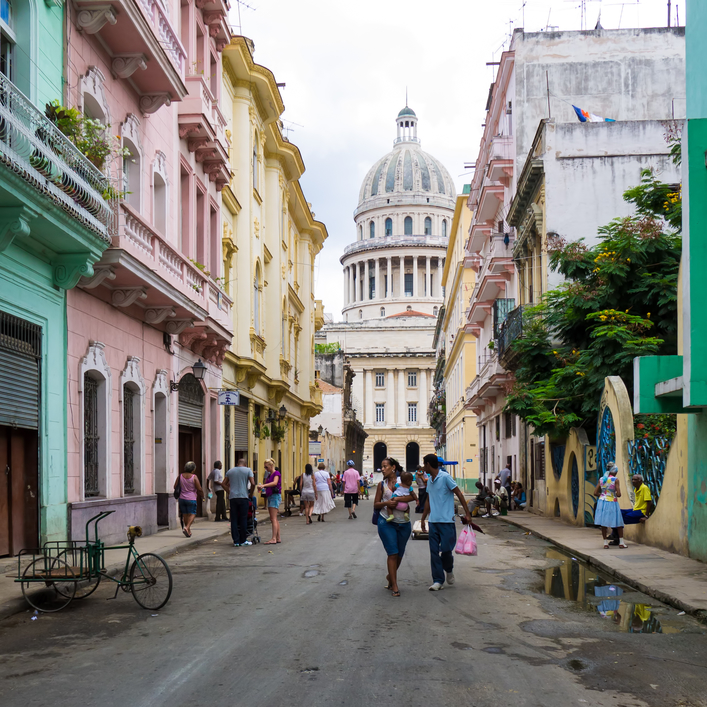 In December 2014, the US and Cuba announced an historic agreement that officially ended their long-running political standoff and marked the beginning of efforts towards normalised diplomatic and economic relations. Since then, the US has moved to relax restrictions on certain financial transactions with Cuba and has allowed specific goods to be exported to its nascent private sector. US Congress also removed Cuba from its official list of “countries that sponsor terrorism” on May 29, and a symbolic football match was even played in Havana between the Cuban national team and the New York Cosmos on June 2, the first between the two nations since 1978.

A review of President Obama’s time in office to date makes it clear that advancing relations with Cuba has always been high on the government’s priority list. The easing of travel restrictions and the raising of caps on remittance payments during his first term certainly helped to pave the way for December’s agreement, as well as a meeting in April between the nations’ respective leaders.

A US trade embargo has been in place against Cuba since 1961, soon after socialist revolutionary leader Fidel Castro took power and nationalised US-owned property within the country. As trade and diplomatic relations quickly deteriorated, Cuba looked to increase ties with the Cold War rival to the US, the Soviet Union, which further isolated the island from the US and other market-based economies around the world. While the embargo remains active today, some of its regulations have been relaxed in recent times; for example, the US government has allowed the export of agricultural products to the island since 2003. Despite such allowances, however, the Cuban government has estimated that the trade restrictions in place for more than 50 years have translated into an overall loss of more than $1 trillion for the country.

During François Hollande’s visit to Cuba in mid-May an announcement was made that France will pursue oil-exploration activities alongside Cuba in the Gulf of Mexico, however this was later denied. Visits to Cuba have also come from representatives of Russia, the EU, Japan, Italy and the Netherlands, each of whom are hopeful of establishing solid commercial ties with the country. Moreover, the polls suggest that Cuban-Americans themselves now want an improvement in relations and are keen to see the end of the embargo as soon as possible.

This is unlikely to happen soon, however, due to vehement opposition within US Congress. Efforts for further reconciliation are very likely to be constrained by the Republican majorities within both legislative chambers of Congress—the Senate and the House of Representatives. In particular, there appears to be robust opposition to repealing the Helms-Burton Act, a US law that strengthened the original trade embargo against Cuba and requires free and fair elections to be held in Cuba in which the Castros play no part. The opposition is likely to delay the Helms-Burton issue to 2017 at the earliest.

From the Cuban perspective, the economic turmoil in Venezuela that ensued in the wake of President Hugo Chávez’s death in 2013 left Cuba in need of a new benefactor. Cuba has considerable military influence over Venezuela and has also depended heavily on Venezuelan oil exports. The decline in the stability of the Venezuelan government and the collapse of oil prices over the last 12 months has effectively forced Cuban President Raul Castro to search for new economic partnerships in order to supply Cuba with liquid currency. The most viable option appears to be the potential cash injection arising from increased US tourism to the Caribbean island.

Indeed, the tourism industry may well be the most immediately visible beneficiary of the détente. Tour packages will be made easier to negotiate, now that Cuba has been removed from the US list of terrorism sponsors. According to José Luis Perelló, researcher and faculty member of University of Havana’s Tourism School, Cuba welcomed 1.5 million visitors this year between January and May, and also witnessed a substantial increase of 36 percent in the flow of tourism from the US this year, as well as from Germany (22 percent), France (25 percent), the UK (26 percent) and Spain (16 percent), among others. Meanwhile, Airbnb accommodations in Cuba, known as “casas particulares”, doubled to 2,000 between April and early June.

US agriculture is another industry that looks set to prosper from the warming relations. According to Parr Rosson, the chief agricultural economist at Texas A&M University, a more open Cuban economy along with the lifting of trade barriers could help US agricultural exports to Cuba reach $1.2 billion annually within five years. Addressing the US Senate Committee on Agriculture, Nutrition and Forestry last month, Rosson also estimates that growth in Cuban exports will create 6,000 new US jobs and generate an additional $739 million in business activity throughout the US economy. Sales of US produce including rice, chicken, dry beans, wheat, corn and dairy products are predicted to increase from the expected growth of domestic demand within Cuba. For such numbers to be realised, Rosson argues, income growth and prosperity for Cubans must be the key impending focus, along with investment in infrastructure and supply chains for handling foods. Transparent, consistent policies that facilitate trade are also deemed essential.

Under Raul Castro, several decisive steps towards a more enterprising economy have recently been taken. Private-sector business, for example, has been allowed to develop in sectors not covered by government services, and now accounts for employment of 450,000 Cubans, or 4 percent of the total workforce. The $1-billion Mariel Free-Trade Zone was recently developed near the capital city, which has the potential to create many jobs, although the scale of its success could depend on whether the embargo restriction is lifted, or at least softened, on ships being prohibited from entering the US for six months if they have docked in Cuba.

Cuba also opened an account with a US bank on May 19, removing another obstacle for Cuba to eventually reopen its embassy in the US. Regional lender Stonegate Bank has 21 branches, all in the state of Florida, and has agreed to host the finances of the Cuban government. The restoration of normalised banking operations has been a point of specific importance for Cuba during negotiations, as it will end the reliance of Cuba’s Washington-based Interests Section on having to import funds to pay salaries and other obligations.

Much of the purported resistance towards extending the olive branch to Cuba still tends to originate from critics over its questionable human-rights record. However, the imposed sanctions over the last 50 years have not had the desired effect of triggering any major economic or political transformation within the country, ultimately leaving a large majority of its population in poverty. This suggests that the emergence of a trading relationship with the US could usher in a new phase of growth in Cuba associated with a significantly higher standard of living for its citizens, similar to the growth that has been recently experienced in Vietnam.

Cuba is not expected to be transformed overnight, given that sanctions have left the country’s infrastructure in a crippled state for more than 50 years. The isolationist policies of the US have had little success in promoting economic reform within Cuba’s political system, while the economic influence of the US in Latin America has been greatly damaged. Nevertheless, the US has been Cuba’s fifth-largest trading partner since 2007. Given the pressure from outside interests for both parties to enhance relations, and given that each party seems ostensibly willing to engage in further economic cooperation, it seems probable that opinion within Congress will eventually shift towards repealing Helms-Burton and ultimately lifting the embargo.