The top 50 pharma companies had total revenues of $610 billion in 2012. In this article I will look at a growth stock and the two long term value stocks. Arena Pharmaceuticals (NASDAQ:ARNA) is the first company to be analyzed, this is a company that has been reporting losses for the past few years. This stock may be classified as a growth stock with a higher amount of risk associated with purchasing it. On the other hand, Amgen (NASDAQ:AMGN) and Roche Holding (RHHBY) are both value stocks which have been showing stability in their financial performance from the past few years.

Arena Pharmaceuticals (ARNA) is the smallest of the three companies with annual revenues of $27.59 million in 2012. The company has grown at a rapid pace in the last few years, with an annual growth rate of 29.6%. The company has reported losses for the last 5 years due to the high gestation period, a characteristic of the pharmaceutical industry. But the reported losses have decreased over this period from $ 237.6 million to $ 85.5 million. 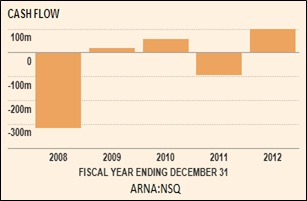 The biggest issue for Arena (ARNA) is iR&D expenses. With revenues lower than their high R&D expenses the company has been reporting losses the past few years. But with a milestone payment of $65 million lined up from Eisai (ESALF.PK), the company is well covered for the short term. The cash reserves of $156 million will also help the company to pay off its liabilities in the near future. The annual cash flow of the company shows the real scenario. In the last five years, despite reporting huge losses, there have been net cash inflows on three occasions. These can be attributed to milestone payments and exercise of stock options. This has also helped the company to pay off its debt quickly enabling it to reduce the interest expenses from $ 21.7 million to $ 9.1 million. 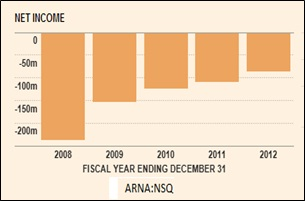 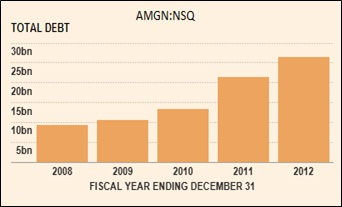 The company has started distributing its earnings in order to maximize the wealth of its shareholders due to a lower growth rate. Although the company is secure in terms of its cash holdings, it has taken up a lot of debt in the last few years. Long-term debt of the company has increased from $8.35 billion in 2008 to $24.03 billion in 2012. The profits of the company are quite stagnant but the EPS has been growing well. 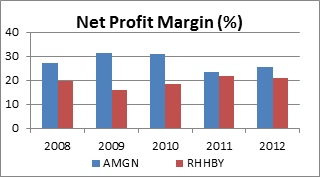 The financial state of Roche (RHHBY) Holdings is very similar to Amgen (AMGN) as revenue growth has been stagnant for the past several years. The revenues for 2012 were the same as that reported in 2008. Net profit margins improved slightly. This company has larger revenue streams than Amgen (AMGN) but their profits are lower. The growth in the whole sector has been tepid mainly because of the larger global economic situation in the past few years. However, in the current scenario, the economy is slightly gaining momentum and that may change the course of these pharmaceutical companies. 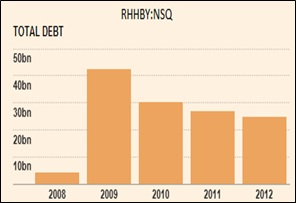 The lower profit margins can be attributed to the high dividend payouts of Roche (RHHBY). The high dividend payout of this company has increased consistently making it an attractive investment for regular income investors. Unlike Amgen (AMGN), Roche (RHHBY) has been paying off its debts rather quickly. While Amgen (AMGN) has used its debt to improve the financial picture, Roche (RHHBY) has done the same through cash inflows, though this hampered the cash position of the company. 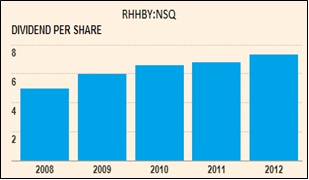 In conclusion, Arena (ARNA) is suitable for investors looking for the higher risk high growth stock. On the other hand, Amgen (AMGN) and Roche (RHHBY) will interest investors looking for fixed income. The financial statements of Arena (ARNA) might not look too rosy due to the regular losses, but the company has the potential to grow rapidly due to a low base. Revenues have grown at a significant pace and net cash flows have been positive lately. Impending milestone payments will enable the company to fulfill its obligations in the short run.

On the other hand, Amgen (AMGN) and Roche (RHHBY) display no scope for further growth. Revenues and net profits have been stagnant for several years. Both companies have used different methods to fulfill the needs of their shareholders. While Amgen (AMGN) has taken on debt to increase EPS, Roche (RHHBY) has been providing high dividends on a consistent basis. I would recommend Arena (ARNA) as a ‘Buy’ for the long term looking at the growth potential of the stock. Investors looking for low risk, defensive investments providing regular income should look at Roche (RHHBY). Amgen (AMGN) is a much riskier investment as compared to Roche (RHHBY) due to the increasing amount of debt.

The pharmaceutical sector has been in a medium to no growth phase in the past few years. But as the economy is turning around, I am seeing signs of fresh air in these stocks and the sector. Amgen (AMGN) and Roche (RHHBY) are facing cash related problems, but they will catch the eyes of investors with low risk appetite.

The Rise and Rise of Thematic Investing

Is There Any Way Back for the US...

Crypto Derivatives Are on the Rise

The Collapse of Thomas Cook: What Happened and...