Top Posts
Growing Enforcement of Environmental-Crime Legislation in the UK: What Are...
Selecting a Corporate Monitor
Biodiversity: Why Is It a Corporate Concern?
Selfies, Deepfakes and Unknown Access: Managing Unstructured Data in Financial...
Resolving Bank NPAs: Five Insights for Today from the South...
Can the Financial System Support the Revival of the Indian...
Home Finance How Blockchain is Disrupting the Finance Industry
Finance

Of all the start-up initiatives over the last decade that can technically be classed under the FinTech (financial technology) umbrella, the one that has received the most attention—and the one that has been surrounded by the most controversy—is bitcoin. The growth in the use of the cryptocurrency has been phenomenal, with 2015 seeing the number of bitcoin transactions per day growing by 150 percent, and the total number of bitcoins in circulation increasing by a solid 10 percent across the 12 months. As of the end of 2015, around 15 million bitcoins were in circulation with a total market value of more than $6 billion.

While its popularity has risen, however, its reputation has suffered. For one, bitcoin’s market price has been hugely volatile, with 450-percent price spikes just a few years ago being recorded: 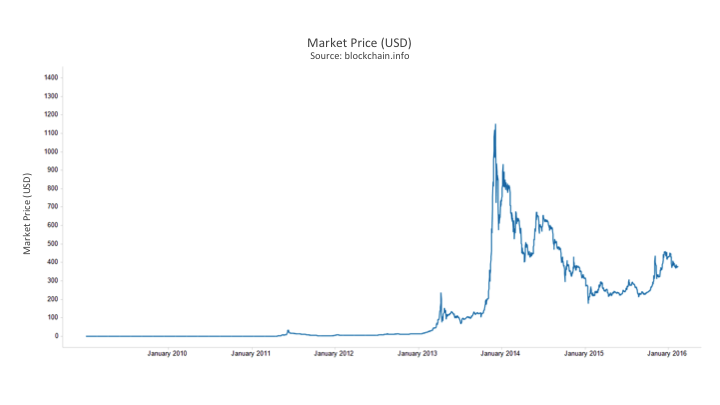 It has also been plagued by major incidents of criminal abuse, none more notorious than Silk Road, the online black market that catered to a wide range of nefarious activities, including money laundering and narcotics trading, and that used millions of dollars’ worth of bitcoins to conduct illegal transactions. As such, bitcoin’s excessive price fluctuations and connections with crime have meant that the finance industry is still reluctant to embrace the digital currency. However, the underlying payment system on which bitcoin functions has been garnering significantly more attention.

Known as blockchain, the main appeal of this payment system is that it uses a decentralised ledger, meaning that it does not require a central independent party, such as a bank, to intermediate in payment transactions. Instead, two entities can conduct a payment directly, while the transaction is securely verified through several copies of the ledger being sent to bitcoin users (called “miners”) located around the world. When a new transaction is made and money is transferred, a unique record, or “block”, is added to the ledger’s chain for the network to see. The sheer number of miners who verify the chain means that the ledger is considered immutable and transparent—hugely desirable qualities over the current system—while the need for a centralised third party becomes redundant. Given that the world largely operates on centralised systems at present, the finance industry is expected to experience a sizeable shakeup across many key business divisions if such centralised systems do start being phased out in favour of distributive ledger technology. The process of tracking financial assets, for instance, will be transformed if blockchain is implemented, given that banks currently use a centralised electronic ledger system to do this. The new technology would eliminate the requirement for a third-party intermediary and would very likely be quicker, more efficient, cheaper and less vulnerable to errors and fraud. The use of cryptographic networks, moreover, makes authentication of the ledger more secure.

A complete overhaul to traditional banking infrastructure is now predicted. Regulatory reporting is set to be among the greatest beneficiaries, given that the technology effectively acts as a record of transactional history. Thus, a fully transparent, accessible transactional database can be delivered for governing bodies. Fraud and money laundering will be tougher to execute, as it would become significantly more difficult to forge documentation; and such crimes would be easier to detect, as the identity of an individual or entity can also be stored on the blockchain, which ensures secure and quick identity authentication without the need to warehouse data at third-party repositories. Market liquidity and transparency would also improve, as would overall market efficiency, especially if several distributive ledgers emerge and are able to compete with each other for users.

According to a recent report by consulting firm GreySpark Partners, the industry could be completely transformed in the next five to ten years, with blockchain being at the heart of front-office and back-office functionality. Specific areas highlighted by the report include operational costs, counterparty risk and settlement risk, which will all be reduced, while payments and remittances, clearing and settlement, and servicing of instruments are just a few of the divisions within capital markets that could undergo an overhaul. In outlining the ostensible benefits to payments and remittances from using blockchain, for instance, GreySpark attests that transactions will be able to occur directly between two parties on a frictionless P2P (peer-to-peer) basis, and that the technology’s application for overseas transactions has the potential to reduce risk and transaction costs and to improve speed, efficiency and transparency.

The response to blockchain’s potential from the banking industry has been distinctly more positive than it has to bitcoin, with banks even willing to collaborate in attempts to unleash the technology’s full potential. FinTech company R3 created a consortium for banks last year in order to help the industry jointly understand how blockchain can promote the creation of commercial applications, as well as to discuss how to establish consistent industry operating standards associated with the technology. As of December, 42 banks had already signed up to the consortium, including JPMorgan Chase, Goldman Sachs, Credit Suisse and UBS. More recently, R3’s managing director, Richard Gendal Brown, has highlighted the cryptographic security techniques used by blockchain, suggesting that they provide the possibility of establishing authoritative systems of record that can be securely shared between firms.

Some banks have also been conducting in-house proprietary research on blockchain, going so far as to create their own laboratories for this purpose. UBS has led the charge and is the first bank to have established “innovation labs”, having concluded in 2014 that blockchain applications “could reduce systemic costs, and provide faster, more secure transfers—particularly in the international arena”. The upshot of the Swiss banking giant’s research thus far is that a blockchain implementation for settling transactions is now currently being developed in concert with blockchain start-up Clearmatics, with the lab reporting that a cryptocurrency could be created that would be “linked to real-world currencies and connected to central bank accounts”. Other undisclosed initiatives are also in the pipeline, some of which are in collaboration with US bank BNY Mellon, which itself has stated that it has been working on an internal rewards system using an in-house cryptocurrency.

Of course, UBS is not the only one displaying such keen interest in blockchain. Citibank is also heavily invested in the concept and is currently testing several blockchain applications, as well creating a new product—Citicoin. The bank is also in discussion with governments over the possible issuance of state-backed digital currencies. Indeed, there is frenzied activity across the sector, with banks estimating that the technology could save them upwards of $20 billion in costs associated with cross-border payments, securities trading and international compliance. Some have also made strategic appointments at the board level, while others have collaborated with FinTech start-ups, providing further evidence that banks could be set to replace their costly proprietary systems with distributive ledger technology. In other words, the banks themselves are funding much of the disruption currently being seen in the industry.

Even exchanges are getting in on the act, with arguably the most celebrated of all blockchain-inspired collaborations being the partnership between Chain, a US start-up, and stock exchange giant NASDAQ. The goal of the partnership has been to use blockchain technology to transform private share trading, whereby trades are recorded on a public ledger and verified at official nodes across the world. Any changes to the ledger would then be immediately synced across the network, which would guarantee the integrity of all transactions. Furthermore, rather than the transactions going through clearinghouses and taking days to settle on each sides’ internal ledgers, deals would settle within minutes via blockchain, with all network members being able to see and verify the deal.

NASDAQ then announced on December 31 what it described as a “seminal moment in the application of blockchain technology” when its Linq blockchain ledger issued securities directly to a private investor, proving in the process that the clearinghouse intermediary was no longer required. NASDAQ CEO Bob Greifeld has since stated that such a process “could revolutionise the core of capital markets infrastructure systems”, adding that the implications for settlement and outdated administrative functions are “profound”.

Blockchain-inspired collaborative projects such as the NASDAQ/Chain partnership are now emerging rapidly across the finance industry. In December, it was announced that an IBM-led group of companies from the finance and technology industries would be creating its own open source distributive ledger. The project, informally known as the Open Ledger Project, can already boast finance members JPMorgan Chase, Wells Fargo and State Street, and technology giants IBM, Intel and Cisco. Former JPMorgan executive Blythe Masters has also been leading a collaborative effort between IBM and start-up Digital Asset Holdings to explore similar ledger technology, while December saw the Securities and Exchange Commission approve a stock plan created by online retailer Overstock, in which businesses can issue and borrow securities using blockchain.

The insurance industry, meanwhile, is also expected to undergo substantial transformation from blockchain’s emergence. The world’s biggest insurance market, Lloyd’s of London, recently announced that it would be updating much of its market infrastructure. The process is set to include recommendations to use blockchain technology in order to improve operating efficiency. Lloyd’s operations director, Shirine Khoury-Haq, recently explained that blockchain has the potential to enhance the way that insurers record risk, while also increasing the speed, accuracy and transparency of many processes. An example could be in the form of blockchain-powered digital “deal rooms”, in which documents could be securely shared across the distributive ledger, which would purportedly remove the need for a third party. It would also be a marked improvement on how deals are done at present—normally on the basis of personal relationships and paper documents.

At present, banks are visibly keen to keep pace with blockchain’s latest developments in a bid to improve their overall efficiency and minimise costs, as well as to push back against the growing threat from FinTech firms eager to capitalise on the technology. Consultancy firm Aite predicts that capital-market spending on blockchain R&D (research and development) could reach $400 million by 2019 from $30 million in 2014, underlining the importance being placed on this system.

However, the technology at this stage is still firmly in its infancy, which means that the specific ways in which it should be incorporated are still being ascertained. As recently observed by Tim Swanson, head of research at R3, “Blockchain is a bit like gluten. Everyone is talking about it, but no one knows what it is in great detail”. Swanson believes that something significant must be delivered by mid-2017, otherwise people will revert back to existing technology vendors. Indeed, the Euro Banking Association expects the finance industry to be disrupted by blockchain-related innovations in two distinct waves. The first will address improvements of existing processes through efficiency, security, transparency and cost, and will have an impact in one to three years. The second wave will involve “new innovations based on the application of the exclusive features of cryptotechnologies”, implying that new products will be developed that, at present, can’t be imagined. Whatever happens, blockchain is now firmly out of bitcoin’s shadow, and as such, finance industry infrastructure will not be the same again.

Is the Banking Industry Suffering from a Talent Crisis?

Traditional banks and the battle to on-board

Can the Financial System Support the Revival of...

FCA Whistleblowing Campaign: How Confident Are You?

Beyond Checking Boxes: A New Approach to Operational...

UK Inflation Surges by More Than Double in...

Reply Retweet Favorite
Growing Enforcement of Environmental-Crime Legislation in the UK: What Are the Implications for Banks? By Christop… https://t.co/9bsBO2dHPn