Top Posts
Banks Remain Uniquely Vulnerable to Sophisticated Cyber-Attacks
Western Banks Willing to Accept the Short-Term Pain of Russian...
Why the US Is Ramping Up Its Presence in Somalia...
How Technology Is Helping to Solve Global Supply-Chain Issues
UK Inflation Climbs to Fresh 40-Year High
Extended Reality and the Metaverse Are Leading Financial Services into...
Home Finance China Housing Market Problems
Finance 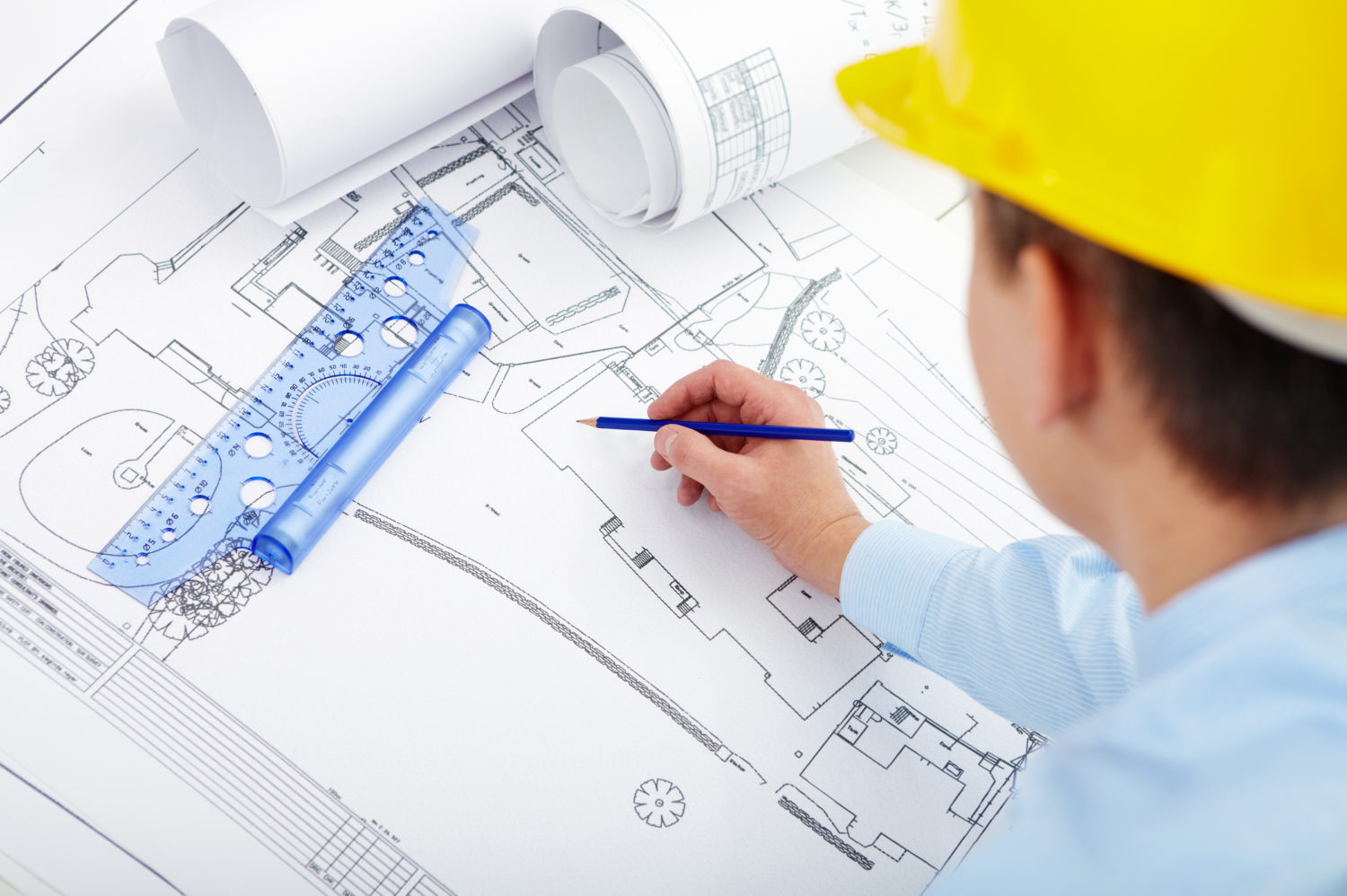 At present, China is seeing a major divergence growing within its housing sector that has resulted in the emergence of a two-tier market. In the country’s smaller cities, the inventory of unused property has created a massive supply glut, which continues to exceed demand. In contrast, however, China’s biggest cities are experiencing the opposite—demand is clearly outpacing the availability of new property, and as such, prices are skyrocketing.

China’s cities are categorised within a tier-based system, according to their size and economic influence. First-tier cities include Beijing, Shanghai and Shenzhen, while second-tier cities mostly consist of provincial capitals such as Nanjing and Hangzhou. Third- and fourth-tier cities are smaller, often newly developed urban areas. What appears to have been emerging in recent times is a distinct two-speed property market, where the top-tier cities are experiencing overheating in housing demand—and as a result, inflated house prices—while the lower tiers are suffering from a supply glut and a subsequent spate of unsold houses. These diverging markets, therefore, are creating a headache for China’s policymakers, who now have to ensure that they implement two sets of housing policies.

The property slump from 2014 onwards has been a key contributor to China’s economic slowdown in recent times. In particular, China’s construction sector has been constrained by the cooling demand for commodities, such as cement and steel. Chinese banks are now also increasingly averse to lending for further property development, especially in the wake of rising debt levels within the country, which have ballooned from 150 percent of gross domestic product (GDP) to almost 250 percent over the last 10 years. This is particularly hampering demand in the smaller cities and thus leaving an ever-widening surplus of unused houses in these areas.

In the biggest Chinese cities, meanwhile, the richer segments of the population have been looking for markets in which they can invest their money, especially since the equity market fallout that has taken place over the course of the last year or so. As such, the tier-one property market is now witnessing a huge influx of investment funds, which in turn is boosting prices further.

Indeed, February saw China’s national house prices rise at their fastest pace since June 2014, with the national average growing by 2.8 percent year-on-year. From an initial glance, this would suggest that the property market as a whole is now recovering from its recent slump. However, this has been due almost exclusively to swelling growth in the country’s tier-one cities. In all, 32 out of the 70 cities included in the official government survey posted price gains in February. The remaining cities remain stagnant, or are even shedding value—the northern city of Dandong, for instance, saw residential prices drop by 3.9 percent. The overall recovery in house prices in 2016, therefore, is masking the huge disparity between market conditions within the two tiers.

There are mounting concerns that a property bubble has formed inside many of China’s biggest cities, particularly Shenzhen, Beijing, Shanghai and Guangzhou, all of which have recorded sharp house price gains in 2016 to date. The technology-oriented city of Shenzhen has been at the centre of this growing bubble, with the price of new residential buildings rising in February by 57 percent from a year earlier. This is also an increase from January’s annual growth figure of 52 percent. Furthermore, recent house-price data for March from the SouFun China Index Academy has shown its index for 100 cities in China rising by 7.4 percent on an annual basis, as well as 1.9 percent month-on-month, which marks the strongest monthly rise in the index’s history. 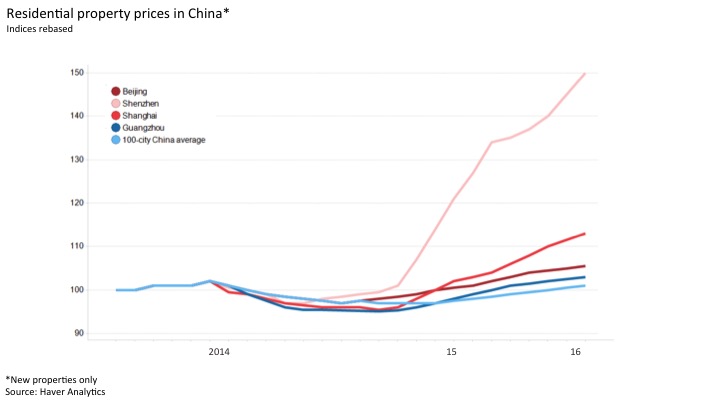 Increasingly expensive house prices in China’s tier-one cities coupled with the growing aversion of central banks to providing loans to an increasingly debt-ridden country has seen the emergence of risky home-lending facilities in the country’s shadow-finance sector. Many are comparing such facilities to the sub-prime loans that triggered the global credit crisis in 2007-09. Home buyers are increasingly having to borrow in order to meet the costs of the initial down payments of new properties. In turn, this has led to a significantly higher presence of peer-to-peer lenders, who raise money from investors and lend it to borrowers at higher interest rates. Indeed, according to Shanghai-based consultancy Yingcan such lenders made nearly $150 million in down-payment loans in January, more than threefold more than they made six months earlier. Zhou Xiaochuan, head of the People’s Bank of China, recently stated that such down-payment loans are illegal. Nevertheless, the growing presence of shadow financing is pushing up property prices further in China’s biggest cities, and widening the gap vis-à-vis the lower tiers.

The diverging housing markets are now also inducing two separate sets of policies from China’s monetary authorities, while the gap between the two markets is now posing serious challenges to government policy. The central bank is keen to encourage sales and reduce the problem of excessive supply in smaller cities; indeed, it has lowered interest rates no fewer than six times since November 2014 in order to facilitate this. Zhou Xiaochuan has also recommended that more nuanced solutions should be employed that cater to each sub-sector of the property market, rather than employing a “one policy fits all” approach. For example, the central bank cut the minimum down-payment requirement on mortgages outside of top cities from 25 percent to 20 percent in February, in a bid to boost demand.

Tier-one cities are now implementing policies in a bid to rein in spiralling house prices, such as strict enforcement of home-purchase limits and taxes, increasing the supply of land available for property development, particularly for use in the construction of small- and medium-sized homes. To curb further price acceleration, Shenzhen’s city government rolled out new policy measures in late March, including an increase in down-payment requirements, as well as extending the length of time someone has to work in Shenzhen before they are allowed to purchase property within the city’s borders. To some degree, the policies are already having their desired effect—new home transactions have fallen for five consecutive weeks, including a healthy weekly drop of 16 percent for the week ending April 3. Housing sales at the “luxury” end, however, continue to grow rapidly, with new luxury apartment sales rising 35 percent for the month of March, according to data from property agency Centaline.

Shanghai, meanwhile, now requires buyers of second homes to pay more than 50 percent of the overall price of the property as an initial down payment in order to obtain a mortgage; the previous ruling was 40 percent. Non-residents will also find it tougher to buy property in Shanghai, as they will now have to wait five years before they can buy a home if they don’t have a residence permit— previously they had to wait only two years.

At the same time as the top-tier housing boom is occurring, however, the rest of the country is experiencing a massive supply glut—that is, property that has been constructed but remains uninhabited. Such housing market woes today can be traced back to problems that emerged about 10 years ago, when regional governments in the country liberally provided land to property-development companies, who provided the state with revenue, and gross domestic product (GDP) grew accordingly. Such development, however, was seldom in accordance with local housing demand, which meant that the process was ultimately an inefficient one. According to recent estimates, the smaller tier-three and tier-four cities constitute up to 90 percent of new construction. This implies that construction is not heading to the places it is most needed, namely the tier-one cities, while the supply overhang in smaller cities is likely to worsen.

Areas where empty tower blocks and even empty towns have surfaced are now becoming increasingly prevalent. Such areas are commonly known as “ghost cities”, whereby new residential developments have been completed, along with shopping malls, stadiums and administrative buildings, but they remain crucially lacking in sufficient numbers of people to occupy them—people who are either choosing to remain in rural areas (such as farmers) or those who are moving to higher-tier urban areas, where house prices are rising. To give some indication of the scale of this construction, it was recently reported that between 2011 and 2013, China used 6.4 gigatons of cement—more than the total amount used by the US during the entire 20th century. By the end of February, the country’s property inventory was up by 15.7 percent from the previous year to a staggering 739 million square meters, a housing stock level that some property developers believe would take up to eight years to get through. Today, vacant homes in China exceed 13 million.

Some provincial governments have already attempted to purchase residential “inventory projects” to be used for affordable housing schemes at the expense of new construction, such as in Shandong and Liaoning, while land supply for commercial residential purposes has also been curtailed in many areas. More recently, the housing ministry has been trying to push through measures that would extend access to housing funds to rural migrants. Such funds consist of contributions from local residents and employers, and provide relatively inexpensive loans to first-time home buyers. Cities are also offering subsidies and urban-residency permits to potential home buyers that would allow them preferential access to education and health benefits, while state-owned banks are lowering their collateral requirements for mortgage applications in rural areas. Many of the efforts enacted by policymakers, therefore, are in a bid to encourage rural workers to buy homes and ultimately reduce the supply glut. Thus far, however, people have only been buying homes in areas with rising prices, especially tier-one cities, or choosing to stay in rural areas, where they can build their own homes.

According to China’s housing minister, the property market still has room to grow, especially as the population flow to China’s biggest cities continues unabated. Indeed, the government is hoping that by 2020 its urbanisation rate reaches 60 percent, compared with the 56.1 percent witnessed today. If this transpires, then some of the unused real estate inventory in China’s lower-tier cities may well be filled up. Today, however, the crux of China’s property market problems lies in its imbalance between supply and demand. New construction is taking place where there is low demand, while supply is insufficient in the most popular cities. 2015 saw 61 percent of new-home building starts in third- and fourth-tier regions, while only 5 percent were in first-tier areas, according to government data. In the meantime, therefore, such market imbalances will continue to provide major headaches for China’s local and national policymakers.