Top Posts
How Technology Is Helping to Solve Global Supply-Chain Issues
UK Inflation Climbs to Fresh 40-Year High
Extended Reality and the Metaverse Are Leading Financial Services into...
Digital Currency: India’s Move Towards a Digital Financial System
Algarve Snapshot: The Growth of Overseas Buyers
Will London Have to Send More Banking Jobs to the...
Home Finance Coping With Uncertainty: How to Assess the Capabilities of Countries to Manage Change
Finance 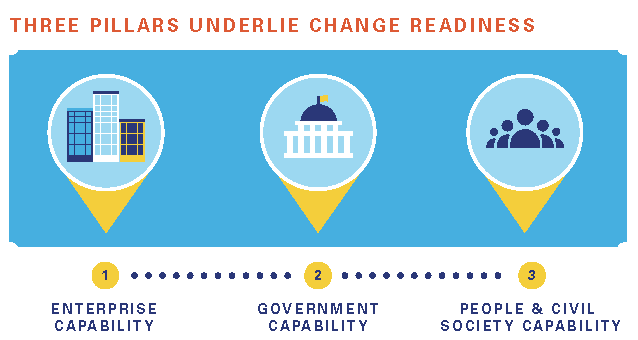 We live in times of ever-increasing levels of turbulence in the global economy, as well as a rapidly accelerating pace of change in almost all spheres of life. This arises from different “drivers”, from factors such as demographic changes to more integrated financial markets. The cost of natural disasters, which are becoming more frequent and large scale, has risen to US$300 billion per annum (source: United Nations), driven by factors such as climate change and increasing population.

Countries may face similar shocks, but while some countries bounce back quickly, others struggle to cope and return to their previous development path. In planning to invest in or work with particular countries, it is very useful to have a measure of their underlying capabilities to respond to future shocks, not just their current levels of development. For those in the business of promoting development, it is also very useful to help identify where and how countries need to be supported to build their capacities.

Even more important than their ability to plan for and respond to shocks is their ability “pro-actively” to take advantage of opportunities. Although some countries have transformed their economies over a few decades—South Korea being a much quoted example, which in 1950 had an income per person below Kenya or Ghana (source: NationMaster)—others have stagnated over the centuries in terms of both income levels and economic structure. The theories for economic divergence are many and varied, but it remains difficult to measure the underlying capabilities of economies and societies to achieve transformation.

Recognizing a gap in this area, KPMG International decided to benchmark countries in terms of how well they would be able to manage change, producing a Change Readiness Index (CRI) for the first time in 2012. An updated index for 2015 was published in June, covering 127 countries, with a combined population and income of more than 95 percent of the global total. The index is comprised of three pillars (enterprise, government and people and civil society), with 29 sub-indices and many indicators below that.

The relationship between the financial sector and the CRI is important. A strong and vibrant financial sector is a key contributor to household and country resilience; however, an over-extended or inappropriately regulated financial sector is clearly a source of instability. Innovation in finance is an important aspect of the change agenda. Innovative approaches in developing countries (such as mobile-based personal banking and finance in East Africa) are being adapted and adopted not just in other developing countries but more widely and with widespread implications. Facilitation of remittances, for example, is an important benefit of financial innovation.

The CRI recognises these issues by including the financial sector most directly within the enterprise capability pillar. The 2015 CRI report notes that “a sound financial infrastructure ensures stable, efficient funding to enterprise and entrepreneurs, helping them exploit opportunities and manage cash flow shortfalls.” The index includes data on the availability of financial services and venture capital, and the domestic bank credit share of GDP.

There are also indirect impacts of financial-sector crises on change readiness. For example, countries that have experienced financial crises have often suffered other impacts, such as increased fiscal deficits and debt levels, which adversely impact their change readiness.

Even though the financial sector is only a small element of the overall CRI, it is interesting to see the importance of financial issues in the overall country results.

One example is the position of countries affected by the Eurozone crisis, which rank clearly below the level that would be expected from their level of development (see diagram, taken from the KPMG Change Readiness Index 2015 report). Italy is ranked 66th in the index (out of 127 countries), the lowest rank of any high-income country, and Greece is ranked 55th, the third-lowest ranking for a high-income country. On the financial sector alone, Italy ranks at 103rd and Greece ranks even lower at 117th. These rankings are extraordinarily low for high-income countries. 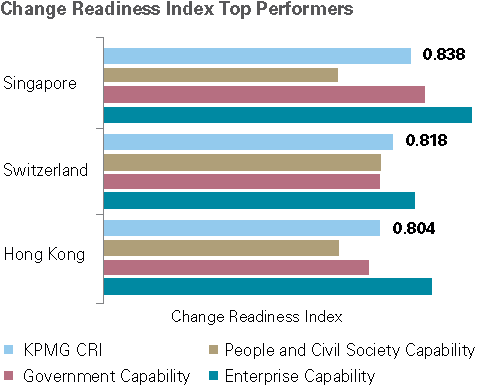 At the other end of the scale, there is a positive relationship between a strong and resilient financial sector and overall change readiness. The top three ranking countries in the CRI are Singapore, Switzerland and Hong Kong. These same three countries lead on the finance-sector indicator (with Hong Kong ahead of Singapore, followed by Switzerland).

Cambodia stands out as the low-income country with the highest change readiness index. Cambodia scores particularly strongly on its enterprise pillar (34th) and scope to develop rapidly through private-sector-led growth. As noted in the report, Cambodia’s ranking is 15 positions higher than the next low-income country in the table. This enterprise pillar is boosted with a fourth place in the economic diversification sub-index and a first place on the informal sector index. We conclude that Cambodia is poised to join a new generation of Asian frontier economies, transitioning from low-income to emerging-market status. Cambodia is one of a number of low-income countries that have a change readiness index that is more than a third higher than we would predict from the level of income per capita. 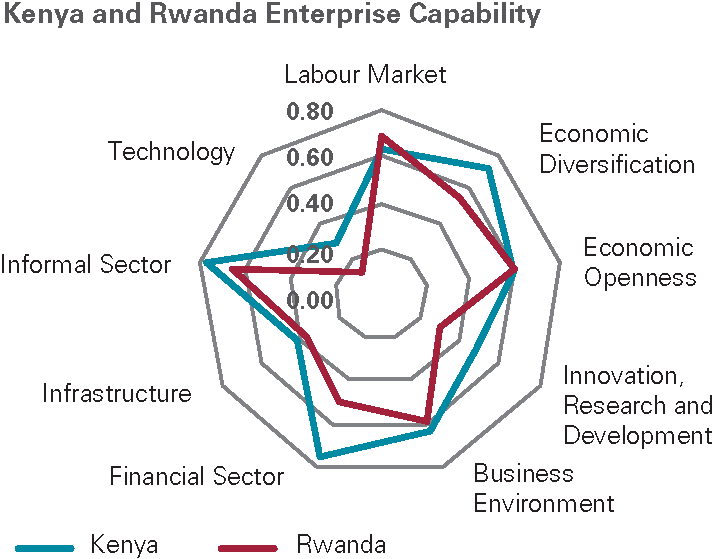 In Africa, the best-performing low-income country in the overall index is Kenya, ranked 65th. Kenya is ranked 47th overall for enterprise capability and a remarkable 17th in the world on the finance-sector sub-index. The second strongest low-income country performance in Africa is Rwanda, which although close to Kenya on the overall index (Rwanda is ranked 69th) has a very different set of relative strengths. It ranks far below Kenya in terms of enterprise in general, and the finance sector in particular, but conversely scores strongly on government capability. 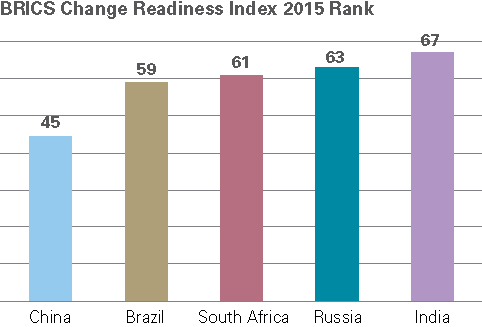 High-potential emerging markets are also apparent from the change readiness scores. For example, India is one of the major gainers since the 2013 index, now ranked 67th overall and 51st on enterprise capability. India’s rank is 42nd on the finance sector alone. India still lags behind other BRICS countries on the change readiness index but gained ground on the others.

Going forward, KPMG intends that the Change Readiness Index will help a variety of stakeholders to tackle turbulence and manage other changes, with state-of-the-art logic.

Beyond the “Moment”: Mexico at an Inflection Point