Top Posts
Challenges Remain, But There Are Opportunities to Be Had in...
Interview with Mr. Olukayode Pitan, Chief Executive Officer and Managing...
Commodities Outlook for 2023
The Value of Cash in a Time of Crisis: How...
The US-Africa Leaders Summit: Fostering a Closer Relationship with the...
Three Key Sectors in Which to Invest in 2023
Home Finance Will a Post-Brexit Pound Keep Getting Stronger?
Finance 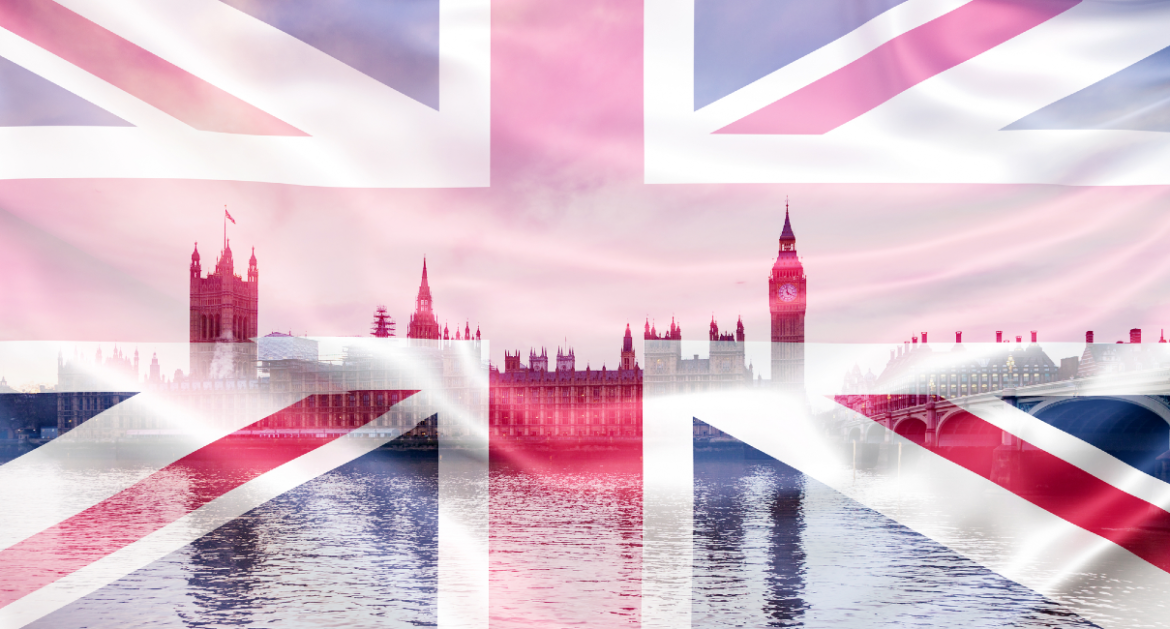 With the bulk of the United Kingdom’s long-running exodus saga now firmly in the rear-view mirror, many are left wondering about the strength of the UK economy as it embarks upon its post-European Union (EU) era. And perhaps chief among those concerns for a variety of stakeholders is the long-term strength of the pound—specifically, whether it can scale the heights and return to levels last seen prior to the advent of Brexit or remain consigned to much lower rates for years, if not decades.

The Brexit referendum in June 2016, which confirmed that the UK would be leaving the European Union, was accompanied by the single biggest devaluation of any major currency in 50 years, as the pound slid to a 31-year low of US$1.33 immediately after the result of the vote, having traded as high as $1.50 just before polling stations closed. Further bearish sentiment in the following months saw the UK currency trading as low as $1.20 in January 2017, its lowest level since 1985. Of course, one could argue that Brexit simply represented yet another notch on the pound’s long-term bearish trend that began in mid-2014, when it declined from around $1.70, or perhaps an even longer but more weakly correlated downward slide that had transpired over several decades. 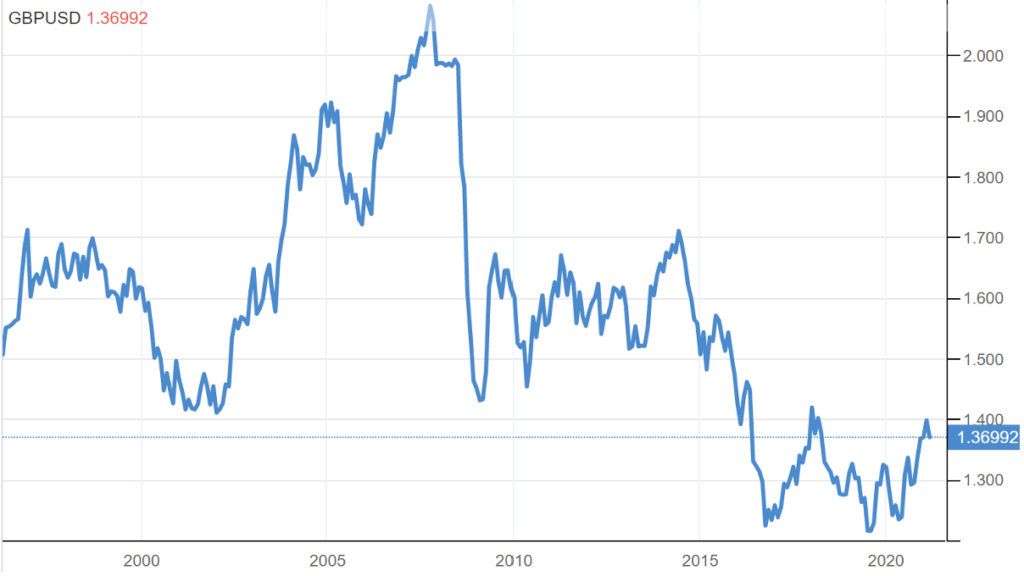 British Pound versus US Dollar (1996-present)

But the last few months have shown that the pound sterling is likely to remain much stronger than during its post-referendum period. It once more surpassed the $1.40 mark during the final week of February, after three years of languishing below it, and has mostly hovered just below this level since then. What’s more, February marked the fifth consecutive month of gains for the pound against the US dollar.

Will this bullishness continue? Certainly, there are a handful of key factors that would seem to suggest that further gains for the sterling are attainable this year. For one, its recent behaviour has been more that of a risky than safe-haven asset since the start of the pandemic, according to Capital Economics’ chief UK economist Paul Dales, with the correlation between the FTSE 100 Index (Financial Times Stock Exchange 100 Index) and the pound having risen sharply since the start of 2020. “So even a small rise in investor sentiment should be bullish for the pound,” Dales noted in February.

The UK’s largely successful vaccine rollout to date has also improved its economic outlook relative to other countries, especially those in the EU. This is creating a more stable and attractive environment for investors in the UK vis-à-vis its regional peers, which in turn should boost the pound’s outlook. Indeed, eurozone countries continue to face supply issues in their vaccine-distribution plans and have shown considerable reticence in distributing the AstraZeneca/Oxford University version of the vaccine. “Covid cases are rising in Germany and France resulting in stricter or extended containment measures, while the vaccine deployment has been much slower than in the UK and the US,” Nikesh Sawjani, an economist with Lloyds Bank, recently noted.

The Bank of England’s (BoE’s) recent confirmation that it is neither tempted to use negative interest rates nor expand its quantitative-easing (QE) purchases was also warmly greeted by sterling bulls. And while the United States and eurozone are likely to continue with their asset-purchase programmes for at least another year, this should raise expectations of a more hawkish monetary policy relative to those in the US and the EU, which should again drive the pound higher. Indeed, throughout much of the pandemic to date, the BoE has signalled a decidedly more cautious tone when it has come to rate-setting and QE than its comparative peers, such as the US Federal Reserve and European Central Bank (ECB). And the pound has responded positively to this sentiment, rallying notably in February following the BoE’s monetary-policy meeting.

The March Monetary Policy Committee (MPC) meeting, however, seems to have elicited a much more subdued reaction from the sterling after the BoE confirmed that any hike in interest rates remains a long way into the future. “Rates won’t rise next year as the markets expect. In fact, we think that rates could stay at +0.10% until 2026,” according to Ruth Gregory, senior UK economist at Capital Economics. Investec, meanwhile, is not quite as dovish with respect to monetary-policy action but still does not anticipate any tightening this year or next. “After the events of the past six weeks, the minutes had an upbeat feel to them,” said Philip Shaw, an economist at the UK bank. “At this stage, we are not inclined to shift our view that the next move in the policy rate will be a 25bp increase (to +0.35%) in Q4 2023.”

Other major financial houses have echoed this more cautious outlook in recent weeks. J.P. Morgan, for instance, stated on March 17 that the pound had peaked against the dollar, despite being among the best currency performers in 2021. The US bank sees weaker fundamentals returning, alongside the boost from the rapid vaccine rollout fading. “We are reluctant to embrace a view that the medium-term outlook is set completely fair and that GBP can sustain further material appreciation once the vaccine racehorse is over and investors refocus on the sustainability of post-Covid growth,” it noted.

And although J.P. Morgan acknowledged that the UK economy will continue to post a strong economic recovery over the next few quarters, structural weaknesses in the aftermath of Brexit will continue to weigh considerably on the pound. “The UK economy is akin to a sprinter here—it may be fast out of the post-COVID blocs, but it has questionable stamina, and the lead that the UK could open up in the next few quarters may eventually be whittled away,” it stated. The bank also views the recent decisions by Chancellor of the Exchequer Rishi Sunak to delay fiscal tightening and implement near-term stimulus as ones that will have a “catch-up” effect rather than being indicative of the UK’s economic strength. “While the pace of vaccinations will affect the relative trajectory for the UK economy for the next few quarters, it won’t impact the sustainable trend rate of growth, and it is this which is more relevant for the medium-term GBP forecasts,” the bank acknowledged.

As such, it remains debatable whether the pound can regain its pre-Brexit strength in the long run. Indeed, the very nature of Brexit itself could consign the sterling to pre-$1.40 levels for quite some time, with Bank of England interest-rate setter Michael Saunders recently stating that the long-term effects of the UK’s departure from the European Union are likely to have a bigger impact on companies than the coronavirus pandemic. “Businesses will shake off the effect of COVID-19 as they’re temporary, but the long-term effects of Brexit could be more permanent,” Saunders said during an interview with TheBusinessDesk.com website in November 2020.

The divorce also continues to hamper the flow of trade between the two parties, with trade costs rising on the back of an increase in the recorded number of delays and more red tape associated with trade activity. The lack of clarity surrounding services, moreover, is likely to continue weighing heavily on the overall UK-EU trading relationship, with the final agreement between the two parties more focused on trade in goods. With financial services representing a hefty 7 percent of the UK’s gross domestic product (GDP), the lack of finality surrounding trading relationships will keep the pound relatively muted for the time being. And with the EU set to begin legal proceedings against the UK for allegedly breaching international law and extending a grace period on customs checks at the border between Northern Ireland and the Republic of Ireland, the growing acrimony between the two could also end up proving to be a drag on the pound that may not be so easy to shake off.

GameStop: What Happened, and What It Means